We’ve all lived in close quarters. City living, ain’t no changing it. Tandem parking, unruly landlords, that creepy lady down the hall who hasn’t been seen in a few days and whose chihuahuas were starting to sound hungry but now, oddly, have been making loud, grunty barks of carniverous contentment.

Anyway, it’s really fun. Unless you live underneath my neighbors. Let’s call them Cash and Isadora. Cash is a heavy-set, volatile tattoo artist with no discernible skill-set besides drinking heavily and shout-talking. Isadora is a milky-skinned red-head who seems to scurry instead of walk and has an armful of very frightening tattoos, courtesy of Cash and his home-tattoo kit I hear wailing away at all hours of the night. Classy couple, for sure.

Cash and Isadora barely, if ever, have sex, it seems. And I would know because their bedroom is directly above mine and I KNOW they’ve heard me, ahem, practicing Adult Wrestling by the furious pounding on the floor during a few such, ahem, matches.

So because of our paper-thin walls/ceilings/floors, you’d think them not doing the Freaknasty a mere five feet above my head every night would be a blessing. But you know what they ARE doing INSTEAD of having sex?

EVERY OTHER LOUD THING IN THE UNIVERSE. EVERY SINGLE HOUR OF THE DAY AND NIGHT. Such as:

I can see it now. Cash, sweaty and barely conscious after putting another 24-pack of Bud away, barks orders at Isadora as she sets empty 40s of Mickeys up in bowling pin fashion. Then here comes the loud, thunderous rolling of the heavy metal alternator from a ’67 Chevy they’re using as a bowling ball anddddddd…….KABOOM! It’s a split! Which I wish they would, too. 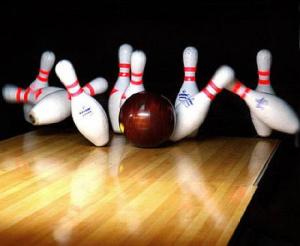 2. LEARNING HOW TO MAKE BALLOON ARCHES:

Look. I have heard, multiple times, the unmistakable sound of a helium tank being dropped, dragged, and rolled all around the apartment above me. I was on Student Council in high school and we had to put together a shit-ton of balloon clusters for pep rallies (don’t judge and YES, we used to take big rips of helium straight out of the container, duh) so I am very familiar with the girth and weight of a full-sized helium tank. Obviously Cash and Isadora are either entertainers at children’s birthday parties (the horror, the horror) OR they just got a big gig making those massive balloon arches you see at car dealerships. Thank you, Toyota of Glendale! 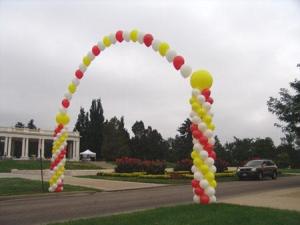 3. GETTING SCUBA CERTIFIED…IN THEIR APARTMENT:

Living in Los Angeles, you’re in pretty close proximity to everything – mountains, desert, and ocean. And what better hobby for two late 30s/early 40s booze, drug, and punk rock enthusiasts to pick up but Scuba Diving! I mean, Catalina has some AMAZING underwater adventures to be had – you just have to pass a Scuba Certification Course. I bet Cash saw an infomercial about it one night during a particularly nasty bout of insomnia (oh wait, that’s EVERY NIGHT) so he sent away for two matching wetsuits, some XXL tanks of oxygen, some flippers & masks and VOILA! Now their living room is a virtual LIFE AQUATIC, complete with kiddie pool right above my dining room table, which would explain why my ceiling is starting to look like a ziplock bag full of browning liquid, left out in the sun and ready to burst. But whatever- PET THOSE MANTA RAYS, DUDES! 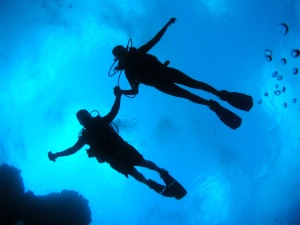 Now I’m not saying that Cash has the moves of Fosse, but there is definitely a real commitment to constant movement in the apartment above me. And I mean CONSTANT. I mean, why sit down on the couch and watch a movie when you can be heel-toe-heel-toe-ing across the entire floor plan of your apartment while your significant other practices what can only be described as an elephant’s version of “shuffle-ball-change” in the bedroom (and bathroom)? What’s truly exciting is that ol’ Cash and Isadora seem to have embraced the whole ensemble aspect of modern dance and have invited all of Hollywood’s most elite (read: unemployed and recently incarcerated) “dancers” over to practice. At 1 am. And 3 am. On Tuesdays. And Thursdays. Oh man, I can’t wait until I get a flyer about my building’s annual production of “Cats,” as reinterpreted by Cash, who’ll be playing an adorbs alley cat named “Mr. Meth-head” who has a penchant for intravenous drug use and mayhem while Isadora and the Pussycat Parade form a chorus line of 4Loco guzzling. 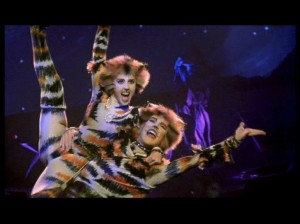 I’ll be downstairs living out my own version of “Les Miserables.” The French Revolution seems preferable to another night of “Jellicle Songs for Crackhead Cats.”

AND THE FINAL – and probably real – THING MY UPSTAIRS NEIGHBORS ARE PROBABLY DOING RIGHT NOW:

5. RUNNING A DRUG AND TATTOO EMPORIUM OUT OF THEIR LIVING ROOM:

Self-explanatory. Does anyone have a Westside Rentals password I could borrow?